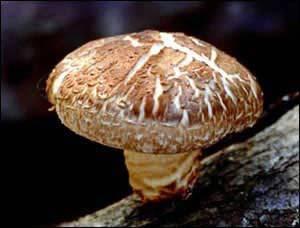 Product Description
Common name synonyms: Black Forest Mushroom, Black Mushroom, Chinese Mushroom, Donku, Golden Oak Mushroom, Oak Wood Mushroom, Pasania, Shiang Ku, Shaingu-gu, Xiang Gu Latin synonyms: Agaricus edodes, Armillaria edodes, Collybia edodes, Lentinula edodes, Lentinus edodes, Lepiota edodes, Pleurotus edodes Main Pages: In Europe and America, "mushrooms" in a recipe usually refers to button mushrooms (Agaricus bisporus), which were first cultivated in France in the 1600's. In Far East Asia, the equivalent is the Shiitake mushroom, which has long been the cultivated "food mushroom" of choice. Only in the past few decades has Shiitake become a household name in western cuisine Known alternatively as Black Mushroom or Chinese Mushroom, wild Shiitake grows in Asia only. The name derives from the Shii Tree, its preferred host, although Shiitake may also grow on oaks and beeches. Shiitake mushrooms have been cultivated in China and Japan for a thousand years. Although most westerners are now familiar with Shiitake as a food mushroom, few know that it's also the most researched medicinal mushroom in Asia. As with other medicinal mushrooms, the research has largely focused on applications against cancer,94 but also on its anti-viral properties. 93 The benefit of using Shiitake mycelium extract as opposed to the mushroom fruit body is that there are compounds in the mycelium that don't exist in the fruiting body or that may be in much higher concentration in the mycelium. The most researched Shiitake mushroom extract is known as LEM, short for Lentinula Edodes Mycelia. (Shiitake's Latin name is Lentinula edodes.) Research has found LEM to enhance the immune system, 95, 96, 97 especially against bacterial infection. 98,99 It's also been reported to be anti-tumoral. 100 A 2005 study published findings that it killed melanoma cells while sparing non-diseased tissue. 101 Lentinan is the name of another much researched compound isolated from Shiitake mushrooms, named after the Latin genus name Lentinula. Lentinan is a polysaccharide that has been found to stimulate the human immune system to combat cancer. 102, 103, 104, 105, 106, 107, 108, 109, 110 It is currently used in Asia as an intravenous cancer drug.